The Congo attracted unusual types. One of Mike Hoare’s ‘Wild Geese’ was a German doctor who was then working as a journalist in Kenya, and who decided to join 5 Commando to get the inside story. Hans Germani must have been quite a guy. Mike described him as an untidy intellectual who was fearless in battle.

Turns out, Germani also spoke many languages including Swahili and Mike, needing help in that department, got Germani to work alongside him. When it was all over, Germani immediately wrote a book about his experiences. So here we have a primary source giving a written account of what Mike was really like, in action and out.

In his book, titled White Soldiers in Black Africa, Germani says, for example, that Mike discussed politics and literature with him, and recited English verse. ‘Only now did I begin to know this strange man. He was a genuine British officer in his posture and behaviour, but also a genuine Irishman in his recurring sentimentality and his fighting spirit.’

He also says Mike ‘was always out in front and showed less mercy to himself than to his soldiers. Perhaps it was because this wild band of adventurers, drinkers and similar ilk loved him, although he often treated them like dogs. To the Belgians he was a mystery and magnificent.’ 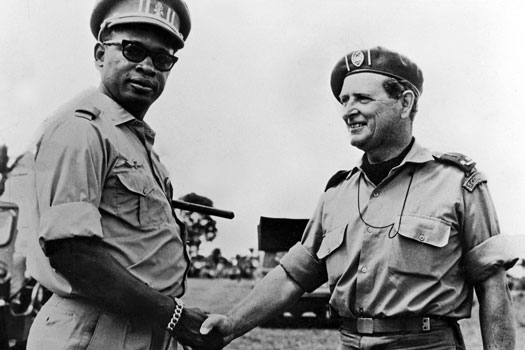 In May 1965 General Mobutu flew to Faradje in the north-east Congo to congratulate Mike Hoare and his 300 ‘Wild Geese’ for ‘exceptional services rendered’.

If you would really like to know what Mike Hoare was like, you can do no better than read ‘Mad Mike’ Hoare: The Legend. Please enquire via the ‘Buy Books and More’ tab. And remember, these books make wonderful Christmas and birthday presents …. Tell your friends.