The Edward Hotel and Katanga

Mike Hoare’s mercenary soldiering days began with a drink at The Edward Hotel in Durban.

Mike Hoare was a dreamer and a schemer, and some of his schemes made him prosperous long before his Congo days. And so it was that he was able to frequent the best hotels and restaurants in Durban in those days – the fifties.

Mike’s favourite hotel in Durban was called ‘The Edward’, a posh place with a range of restaurants, bars and other amenities. It was here, on the colonial style verandah, that Mike and his brother Ben would gather at 5 pm on Thursdays to have a sundowner and watch the Union Castle mailship arrive from England.

It was to The Edward’s famous Smorgasbord restaurant that Mike would take his three children on special and even not-so-special occasions. And it was at this hotel that Mike would meet important people, such as for example Sir Oswald Mosley and his wife. And it was here that Mike proposed marriage to his second wife, Phyllis, after his time in Katanga (June, 1961).

And, probably most importantly of all, it was here that Mike had a drink with a man named Roderick Russell-Cargill who was touring the main cities of South Africa to recruit ‘gendarmes’ to bolster the cause of Katanga, a province of the Congo that had ‘seceded from chaos’ in 1960 and was now facing three enemies: the Congolese Army, the United Nations ‘peacekeeping force’ and the Baluba tribe in the north of Katanga. 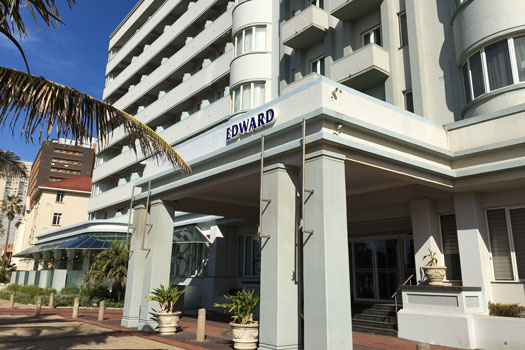 For Mike, Katanga was an opportunity to be a soldier again. He was a soldier at heart, and soldiering was what he wanted to do. And yes, it would bring in monetary reward and great adventure. Mike was hugely attracted by the adventure of it all, not to mention that he would also be supporting the Americans in their cold war against the Russians. Katanga was Mike’s introduction to mercenary soldiering … and soon it put him on the world stage.

And it all began at The Edward Hotel in Durban

For more on Mike’s fascinating life, consider ordering the biography called 'Mad Mike' Hoare: The Legend. Complete our Order Form, or send your postal address, postal code and tel or cell number to chris@madmikehoare.com for a quote.