How Mike Hoare quit the Congo ... and then returned

How Mike Hoare quit the mercenary scene … and was then induced to return.

In July 1964, a cultured chartered accountant from Durban, South Africa, was summoned to the Congo to put down a communist-inspired rebellion. He was given a six-month contract, appointed Major and instructed to recruit 300 men. And of course, within a few months Mike Hoare was known throughout the Western world as ‘Mad Mike’, and he and his ‘Wild Geese’ had recaptured the important city of Stanleyville from the rebels, rescued 2000 nuns and priests from unspeakable atrocities …. And become legendary.

But by the December, the horror had taken its toll. Mike had had enough of the ‘damnable country’ and told his commanding officer, Major-General Joseph Mobutu, that he did not intend to renew his contract. Mike flew back to Durban for a break and to get some perspective.

Mike loved Durban. His father, a master mariner, had told him it was one of the two best port cities in the world. Mike called it a ‘paradise city’ and in many ways it was. Its beachfront was known as the Golden Mile and you could swim in the sea all year round. And of course Mike had a 35’ yacht moored in the harbour, and a young wife and baby boy in his family home. 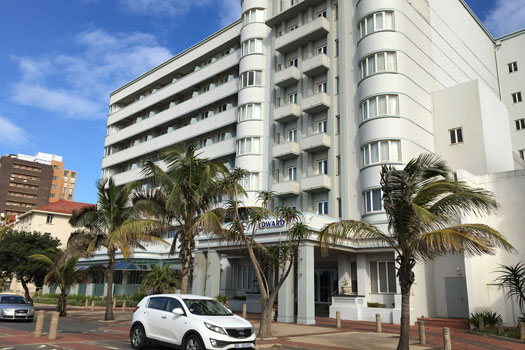 As we now know, Mike and his Wild Geese were doing the bidding of the CIA – and for very important reasons. So Mike had to tell them he was quitting, and did so at a dinner at The Edward Hotel in Durban, his preferred venue for all important meetings.

But they would not have it, and insisted Mike to return to the Congo to finish the job of crushing the communists there. Mike demurred. “Name your price”, they told Mike. And he did. But why? What was so important about the Congo that it had to be saved from communism? And what was Mike’s price?

The answer is in the biography called 'Mad Mike' Hoare: The Legend. Complete our Order Form, or send your postal address, postal code and tel or cell number to chris@madmikehoare.com for a quote.