How did Mike Hoare get involved in the Congo?

As so often in life, it is WHO you know that is most important. Mike's best friend at that time was CIA. Forward to 0:44 where Chris joins the dots ...

This is a question I am often asked.
Mike did not reveal the answer in his book Congo Mercenary because it was all a bit hush-hush at the time. As is often the case in life, it was a question of who you know. Here's some background: 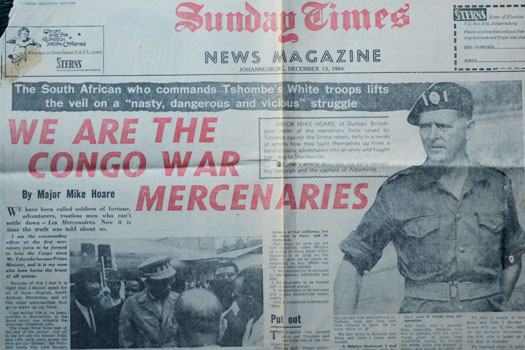 Mike was an ADVENTURER, first and foremost; actually a gentleman adventurer. In 1958 he went looking for the Lost City of the Kalahari; of course he did not find it, but he did find a business opportunity: leading safaris across the Kalahari desert to a water paradise called the Okavango delta.
Fifteen men signed up for the first safari in July 1959, and one of them purported to be the vice-consul at the American consulate in Durban. But in fact Don Rickard, a tall, warm-hearted and generous American with a great sense of humour, was CIA. He and Mike became best friends, and Rickard soon brought Mike around to his way of thinking: that the communists were going to take over Africa and somebody had better stop them.

So, in 1961 when Katanga province broke away from the newly independent Congo, and all hell broke loose, the Katanga government called for mercenary soldiers to reinforce their small army. Mike, encouraged by Rickard, volunteered and in fact spent about three months as the leader of 4 Commando in Katanga. Mike made some contacts. It was a small beginning.
Then, in 1964, when communist-inspired rebels overran much of the country, the Congo government called Mike in and gave him the job, as leader now of 5 Commando, of putting down the rebellion. The original plan called for a minimum of 3000 mercenaries, and of course it was all to be funded by the CIA. The communists had to be stopped, no matter the cost. But why? The answer is fascinating, and it's in my book. Here's a clue: it begins with a C, and it's not copper.

Mike dubbed his men, who only ever numbered around 300 volunteers, the Wild Geese. And the rest, their campaigns, their victories, their shenanigans, their fight against Ché Guevara, is history – and it's all in my book 'Mad Mike' Hoare: The Legend. I even have some leatherbound copies available in a numbered and limited edition of 100 copies, all signed by Mike Hoare. Complete the enquiry form on the Contact page, or send your postal address, postal code and tel or cell number to chris@madmikehoare.com for a quote.