'Mad Mike' Hoare: sailing was in his blood

Mike Hoare's male forebears were all ship's captains. His own father, Thomas, did his sea apprenticeship on a four-masted barque sailing out of Dublin, Ireland, and was a ship's captain by the age of 27. Thomas was, of necessity, tough and adventurous, and Mike inherited this pedigree. Sometimes Mike said that saltwater ran in his veins.

In his early years in Durban, Mike had a number of sailing dinghies, and then in 1963 he bought a 35-foot cutter named Colin Archer. She was a solid and beautiful wooden boat, and this appealed to the traditionalist in Mike – he hated fibreglass.

Mike was a schemer and a dreamer, and no doubt he thought Colin Archer would take him to palm-tree islands with white beaches, turquoise water … and even buried treasure.

It didn't turn out quite like that, as soon Mike found himself on the world stage, having led 300 Wild Geese across the Congo to crush a communist-inspired rebellion. But Durban was his home and he loved Colin Archer, so he would come home and go sailing.

Durban is on what is probably the roughest stretch of coast in the world, and there is no place to go nearby except, if you go north, Maputo (formerly called Lourenco Marques) in Mozambique, and if you go south, East London. Mike did his 'sea apprenticeship' by sailing Colin Archer to both those places, very nearly coming unstuck on the latter trip. All these stories are in the book Mike wrote called, 'Mad Mike' Hoare: The Legend. 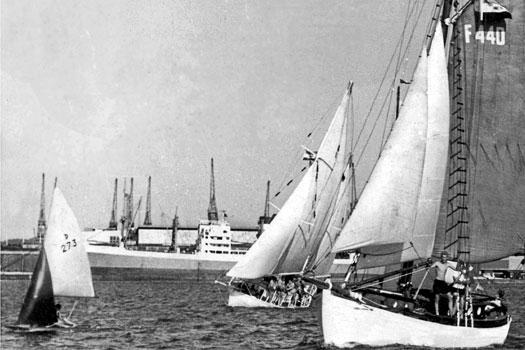 Then, in 1970 Mike sold Colin Archer and moved to Singapore, probably to raise a large force of mercenary soldiers to fight in south-east Asia. But it never happened, so Mike moved to Spain where he bought a massive two-masted sailing boat, a Baltic trader, and sailed the Mediterranean for the next three years with his family as crew. Afterwards, he wrote a charming book called Three Years with Sylvia.

For more about the biography on Mike's life and all Mike's books, complete our Order Form, or send your postal address, postal code and tel or cell number to chris@madmikehoare.com for a quote.