So, yes, he was born with certain talents, but probably in his high-school years he must have decided he was going to take certain steps to get ahead in life. Becoming cultured was one of them. He started taking an interest in poetry and Shakespeare and other literature. In crosswords. Classical music. Politics. Newspapers. And so on. He took a conscious decision to improve himself and make himself interesting and intelligent to engage with.

Mike attached huge importance to manners, and as we know, good manners will take you quite a long way. We are not born charming, we have to work at it, and Mike was an absolute master charmer, especially where women were concerned. "Charm will get you a long way along the road you are travelling," he once told me.

We can all make decisions of this sort; it is never too late.

But back to his sharp mind. Two examples come to mind. Once, when Mike was say in his early 90s, he was staying with my wife and me and our two teenagers; we were all sitting around chatting, and out of the blue my daughter said: "Grandpa, you know that motorbike trip you did in 1953 from Cape Town to Cairo? Did you do that trip alone?"

Without a moment's hesitation, without an um or an er, Mike came back with: "Officially yes!" And then he laughed, and we all laughed, and my wife and I remembered there had been a rumour in the family that he had done part of the trip with someone else, she had red hair, and so on – even though he was married to my mother at the time.

And then my sister Gerry recently told me how early one morning, while Mike was staying with her in Italy in 2009 (i.e., when Mike was aged 90 years) she brought him a tray of tea as he lay sitting up in bed. Putting the tray on his lap, she spontaneously leaned forward and kissed him on his forehead, to which he spontaneously responded "Ah, my medicine!"

He certainly was impossibly charming. 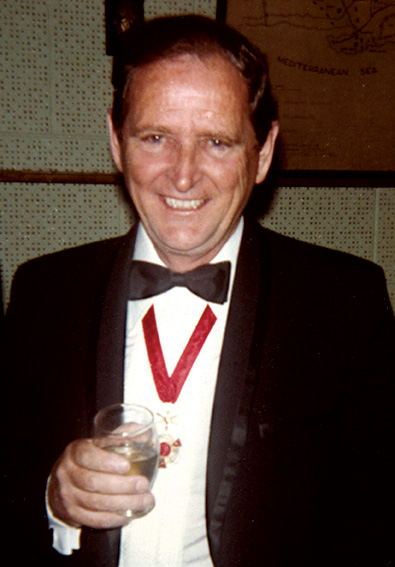 Go to our Order Form for all Mike Hoare's books, and Chris Hoare's 'Mad Mike' Hoare: The Legend. Or send your postal address, postal code and tel or cell number to chris@madmikehoare.com for a quote.