In defence of the Congo mercenaries

In defence of the Congo mercenaries

From time to time, I receive criticism of the Congo mercenaries. Some people describe them as "hired killers" and the like. This does not sit well with me, as the son and biographer of the leader of the Wild Geese in 1964 and 1965. This is how I see it:

We need to go back to 1964/65. The cold war was on, big time. In South Africa, we believed if the Russian communists got hold of the Congo, as they were trying to do, they would come south to grab the gold and command of the trade route around the Cape. And if that had happened, we would be speaking Russian in southern Africa today. 'Everyone' was watching the Wild Geese because if they failed, great danger would follow. 'Mad Mike' and others like him stopped them. They were regarded as heroes in southern Africa, obviously. One has to accept that, yes, they would have killed some people, but they also SAVED many ordinary people in the Congo, and it is accepted that they saved about 2000 nuns and priests, black and white, from further ghastly abuse, and likely death. And they saved the Rhodesias and of course South Africa and its people from such horrors. Winston Churchill said: "We sleep safely at night because rough men stand ready to visit violence on those who would harm us." Yes, 'Mad Mike' and his men had a rough side ... but one hardly ever saw it. 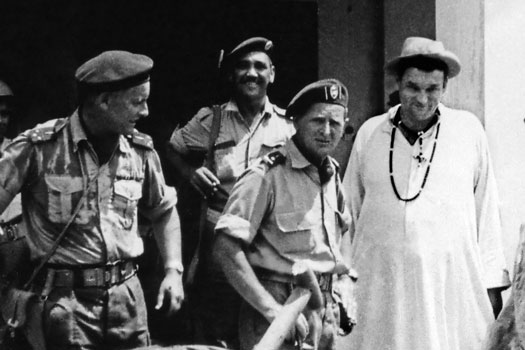 Go to our Order Form for some of Mike Hoare's books, and Chris Hoare's 'Mad Mike' Hoare: The Legend. Or send your postal address, postal code and tel or cell number to chris@madmikehoare.com for a quote.